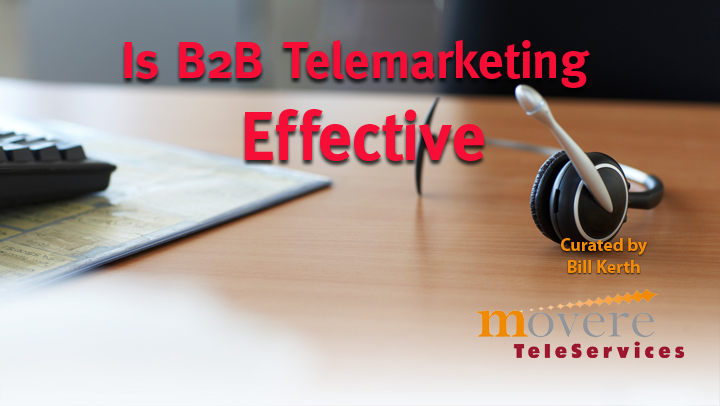 “When It Comes To Leads, Telemarketing Still Beats Social Media.“

The following article appears in, B2C

What are the most effective B2B lead generation tactics? How about social media, content marketing and search engine optimization?

These shiny new tactics have their place, but according to research depicted in the chart, they pale in comparison to some good old-fashioned tactics. Ranking in the first, second and third spots for B2B lead generation are inside sales, executive events and telemarketing.

Given how we feel about those pesky telemarketers who call just as we’re about to sit down for dinner and relax, this finding may be surprising. But remember, we’re talking B2B, not B2C. Business calls tend to be more targeted and professional. Therefore, they are more likely to be welcomed than random calls at home from robotic script readers.

If you look at this chart, one observation jumps to the forefront. One-on-one marketing, whether in-person or on the phone, still rules the day in a digital age.

Given the effectiveness of these somewhat old-fashioned techniques, why is it that we see such
a rush to use alternative marketing tactics? In the case of telemarketing, I believe it’s partly because its reputation has been tarnished by its B2C cousin. But also, it may be because B2B telemarketing is perceived to be expensive. With social media options whose costs can be limited to the time it takes to tweet or post, there is some stiff competition going on when it comes to costs. But look at where those tactics fall on the effectiveness scale. They are sitting pretty low.

If you’re spending more, perhaps the more important question is “What’s the ROI?” After all, if you will get a return, it’s worth spending more. Research conducted by the DMA showed a 1000 percent ROI on telemarketing. Spend $1 and you’ll get $11 back. It seems that most marketers would be pretty excited about those numbers.

How are marketers using telemarketing? The biggest use was to generate leads (84%). Making appointments followed close on its heels (79%). Nurturing leads (68%) and data cleansing (62%) fell into the third and fourth spots.

All this evidence presented about the power of B2B telemarketing is not to say that it should stand alone. It may lead the way, but there are substantial synergies created when companies couple telemarketing with email marketing. And, of course, email marketing is most effective when you support it with educational content that answers your prospects’ questions and helps move them through the buying cycle. It’s all about creating the right mix … but don’t leave out one of the most important ingredients.

Typically, companies fall into telemarketing almost by accident. For instance, the marketing team might return from a trade show with a bunch of leads. They wonder what to do with them. They could give them to sales, but the list is not qualified. And the last time they did that, sales, understandably, failed to follow up. It would be like throwing away their trade show investment.

So the marketers say “Why don’t we put our marketing intern, Mary, on the phone to follow up?” Well, it turns out Mary hates making calls. Also, no one trains her, and she’s not a natural telemarketer. Nothing against Mary! As a result, the effort fails. When this happens, the conclusion is “Telemarketing does not work for us.” In reality, all the company has proved is that poorly planned and executed telemarketing does not produce results.

To give telemarketing a chance and see how it stacks up against other tactics you’re using, you can consider outsourcing the task to a professional B2B telemarketing agency. They will have trained business development representatives who love to be on the phone, developing relationships as they help other business people to solve problems. They do their jobs well because they are trained in best practices, and have the systems to support them, as well as a comfortable office environment in which to work.