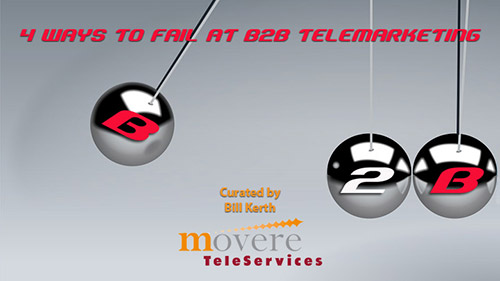 4 Ways to Fail at B2B Telemarketing

“In an Inbound world, outbound telemarketing is still critical to your success.“

If you run a B2B company, you may feel like you’re constantly trying to get more leads. Don’t worry; you’re not alone. According to a recent Placester study, 78 percent of B2B marketers say this is the biggest challenge they face.

No matter how many “thought leaders” declare the dawning of a new inbound era,B2B telemarketing is still one of the most effective (and most popular) lead sources. In fact, it’s ranked as the third most effective demand gen tactic, above SEO, web, and email marketing.

Telemarketing has its problems, and it’s easy to naysay — especially where “cold-calling” is concerned. Some people swear up and down that telemarketing doesn’t work, is dead, and should be abolished forever. But maybe the answer isn’t to get ridof telemarketing. Maybe the answer is to improve it. And what better way to improve than to be aware of the most common pitfalls — and have a plan for avoiding them?

Here are four to consider:

1) The Temptation to Cold Call

For years, salespeople have talked about the “numbers game.” As it pertains to telemarketing, the numbers game means you:

Telemarketing will always have an “element of machine,” as Zak Pines says, but calling strangers without permission and nothing to talk about — save your product — will be extremely unrewarding.

What to Do Instead: First of all, don’t buy a contact list. Buying qualified leads is one thing, but buying just a contact list means you have no way of knowing whether the people you call will even be a good fit.

Second, use an opt-in or trigger-based process in which a specified prospect action moves them to a call list. For example, a prospect might download a whitepaper from your website; this signifies the prospect is aware of and interested in your brand and serves as a relevant conversation opener: “I see you downloaded our e-book on social selling . . .” Sound familiar? Marketing departments use the same kind of process to capture leads for drip marketing or to qualify leads before passing them to sales.

It’s in the DSM-5, right after “hoarding disorder.” Okay, not really, but it’s a serious problem.

Telemarketing monomania happens when a B2B company puts all of their resources into outbound programs and neglects other important channels like email, web, social, and events.

It’s an easy mistake to make, especially if you’re watching your metrics and notice a preponderance of leads coming from outbound, while inbound (oh, humble inbound) squeezes out 5-10 qualified leads per month. Sixty percent of leads, on average, come from direct/outbound marketing, versus 40 percent through digital/inbound channels.

Well, not so fast.

What to Do Instead: Your inbound and outbound efforts don’t have to be mutually exclusive. In fact, they should complement each other. Use inbound tactics to increase brand awareness and keep the top of the funnel full, and use telemarketing to follow up and start conversations with potential customers. In this model, marketing is responsible for feeding the outbound department with a steady stream of qualified contacts.

A 2013 study by Aberdeen reveals a number of key benefits to marketing/telemarketing alignment, including higher annual revenue growth, higher percentages of accepted leads, and better ability to meet sales quotas:

3) Getting Hung Up on the Hard Sell

One of the biggest mistakes you can make with telemarketing is pushing for a commitment too early — e.g. trying to schedule a sales appointment or pitch your product on the first phone call, after a stilted introduction. You’re already asking for a person’s time, which is an imposition. If they feel you’re trying to sell something, they’re even less likely to stay on the phone.

In the B2B sector — where almost every sale is a “complex” sale —  it’s counterproductive for telemarketers to be “selling” anything. Buyers have a long, intricate decision-process to follow, and they want to be advised and educated, not solicited.

What to Do Instead: The best thing you can do is lead with a value proposition. That might be a relevant piece of content that addresses one of the prospect’s pain points and a follow up call to discuss further, or it could be something else —  an assessment, a free industry tool, etc. Over time and with multiple conversations, you can gather BANT information (budget, authority, timeline, need), determine if prospects are interested in your services, and then refer them to a closer or account manager.

Some refer to this approach as “teleprospecting.” Where traditional telemarketing implies pitching products to strangers, teleprospecting is about engaging in valuable conversations that identify and generate demand.

4) Forgetting to Be Human

It’s ironic that telemarketing accounts for such a large percentage of B2B leads, and yet companies invest so little in their telemarketers — invest meaning train, coach, compensate, etc. A team of poorly trained, lackadaisical phone reps will have a hard time starting meaningful conversations. The bad call scripts, the robotic voices, the agents that aren’t fluent in their prospects’ native language . . . it all adds up to a steaming pile of failure. And it’s no small wonder. People want to be treated like people, and that requires some basic call etiquette, like speaking in full sentences, addressing people by name, appealing to their needs, normal people stuff like that.

Many companies decide to outsource their telemarketing program, but for the wrong reason. They’re more concerned with cutting costs than with improving results. And as a consequence, they partner with a disreputable teledemand service, and their outbound revenue plummets.

What to Do Instead: Be human. Give your inside sales reps the training and coaching they need, and make sure they have an adequate understanding of not only your products and services, but also the motivations and goals of your prospects. If you decide to outsource, choose a lead generation service that cares for its phone reps and will work according to your needs.

Don’t Be Afraid to Get Help

A lot of companies simply don’t have the resources to teleprospect, or at least not to do it well. And really, teleprospecting is only one piece of the larger demand gen puzzle. If you want to keep a steady stream of qualified leads in your pipeline, you need a strategy that stretches across departments and effectively balances inbound and outbound tactics. You need good agents, good content, and the science/wizardry to make it all come together.