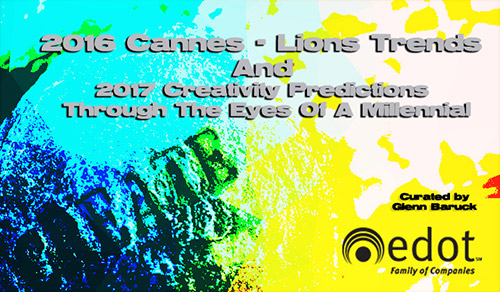 July 6th, 2016 Posted by Glenn Baruck Marketing 0 thoughts on “2016 Cannes Lions Trends And 2017 Creativity Predictions Through The Eyes Of A Millennial”

Last week, I’ve experienced the “world’s largest creativity festival” through the lens of a Millennial and left with the reminder that my generation seems to rule the marketing world. (Isn’t that a millennial statement for ya?) As the youngest person from Ketchum PR to attend the Cannes Lions International Festival of Creativity, my decoded themes of the 2016 Cannes Lions quickly turned into predictions for 2017 and the future of marketing as a whole:

1. Listen to the kids, bro. Heard throughout sessions, during award shows and among conversations, Kanye West’s 2015 MTV VMAs speech was referenced so many times at Cannes that it seemed to radicalize Gen X creatives. While I appreciate the resounding call-to-action, I was surprised that listening to the kids, a.k.a. the trendsetters and creators of pop culture, was a revolutionary idea. Future prediction: As the Kylie Jenners of the world break through social feeds andYouTube stars carry more clout than mainstream stars, elevating the Gen Z conversation will be inevitable. The same tech-savvy world we broke into at Cannes Lions is the only world Gen Z has ever known. They’re texting earlier, tweeting faster, coding younger, and it’s time we pay attention to that potential–and maybe even say, “thank you, Kanye,” for paving the way for “the kids” to be heard.

2. Millennial marketing is no longer novel. Even Millennials are done hearing about Millennial marketing, and that oversaturation offers a strong next step for our industry. Taboola CEO Adam Singolda hit the mark when he told the audience to “forget about age and play to passions and experiences.” Rather than focus on generations, use Singolda’s messaging angle to re-engage the largest target market and make them strive for marketers’ attention again. Future prediction:Every generation reacts similarly to every season in life, thus if Facebook or Snapchat were around decades ago, the unique characteristics we’ve placed on each generation now would no longer be so unique. Instead of worrying about naming the ages, 2017 will dive deeper into what motivates action and passion.

3. Jump aboard the tech train. Virtual reality, augmented reality and 360 videos took over at Cannes this year, and the industry was able to get a glimpse into the possibilities of future tech with interactive experiences from Google, Samsung, and more. Future prediction: Next year, the tech talk will return in full force but the conversation and sessions will be less focused on the “wow factor” and more focused on how to use VR, AR, and other technologies throughout public relations and storytelling. Consider 2016 the year of tech education and 2017 the year of tech application.

My perspective and predictions might not be the same as the CEOs or CMOs who sat beside me at Cannes Lions, but that’s what makes our communication industry so dynamic. Next year, VR will become tangible, Gen Z will be a hot topic, and my Millennial lens will be old news; this year was simply a spark of imagination when it comes to future possibilities.

Learn more about the eDot Family of Companies.