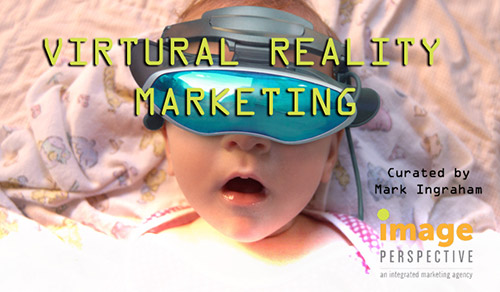 “Marketing via Virtual Reality; we’re just beginning to scratch the surface. Mbryonic shares how marketers are applying the technology today.”

The following article written by:  mybryonic

As of April 2016, people that succeed with Virtual Reality (VR) Marketing do two things very well:

First, they identify VR Marketing narratives that get them results.

Second, they put 100% of their resources into creating the stories that resonate with their audience.

“How do I find VR Marketing strategies that actually work?”

Well, today we’re going to make it easy for you.

All you need to do is carve out a few minutes of your day and look over the 10 Best Uses Of Virtual Reality In Marketing.

Here’s why VR Marketing campaigns are so successful:

VR solves a huge problems marketers have around engagement and awareness for the following reasons:

You’ll learn today the how the best marketing campaigns use VR to create successful campaigns. Here’s our video that shows you exclusive footage from each campaign and it showcases what you can learn from each campaign. Keep scrolling to see our write up of each one.

The 10 Best Uses of Virtual Reality in Marketing Video:

Because we also have extensive write-ups below detailing why each campaign was a success. Be sure to bookmark this page and come back to it for your research.

Last Christmas, Coca Cola created a virtual reality sleigh ride. Using Oculus Rift, thousand of people all over Poland were immersed in this virtual world and were Santa Claus for a day! It is like a roller coaster ride but you are Santa Claus flying over the country and into different villages.

Coca-Cola is a major brand and they’ve been experimenting with Virtual Reality for quite a while now. Coca-Cola is always striving to be new and fresh and this was a perfect opportunity for them. This sleigh ride was a great way to show their modern brand through the use of VR. It introduced people in Poland to virtual reality and help them better experience the joy of Christmas.

Through their Happy Meal Box, McDonald has released their own Google Cardboard. They’re doing a trial run in Sweden where the happy meal toy is a McDonald’s Cardboard VR Headset. In this case, it’s helping people turn happy boxed into happy people. Slope Stars is the game that comes with the goggles. It’s tied to a Swedish recreational holiday that centres on skiing.

McDonald has an enormous reach all over the world. They are legends of marketing. This new promotional strategy helps utilise their happy meal box and repurpose it as a “Happy Goggle.” The reusability is very cool. And they’re providing extra entertainment with their app to their customers making this a great campaign.

The Whitehouse invited The Verge to do a video on Michelle Obama’s success with social media. She talks about her efforts to popularise healthy eating and exercise. The 10-minute video is a 360 video that has After Effects like animation on it to help illustrate Michelle’s point. The video is the best VR infographic explainer video I’ve ever seen. For marketers reading this right now, if you need to explain a company’s mission or a new service, you’ll definitely want to look into this video and use it as an example.

It solves the big problem marketers have with VR. Mainly, how to properly make use of the 360 space and it creates a narrative flow that anyone can follow along with. This is a huge a challenge because it is difficult to capture someone’s attention when they can look anywhere. The Verge creates these infographic pop-ups that guide your attention. And even when you’re not looking at the speaker, they’ll reproduce Michelle’s face on the other side so you can continue to follow the story while exploring the space. This video masterfully engages you on Michelle Obama’s social media story.

War has driven 30 million children from their homes. The New York Times detailed their tragic stories in an immersive documentary that was available to download for mobile app and Google Cardboard. This wasn’t a marketing campaign but the publicity of generated by distributing a million free Google Cardboards to their readers grabbed headlines. The VR studio vrse.works developed Displaced for the NYTVR app.

The film did an excellent job at showing the devastating effects of war and put you in the heart of the story. A worthy story and a great marketing move by the NY Times.

Soft cheese supplier Boursin created a virtual reality experience that takes you on a journey through a fridge full of delightful treats. They hired the marketing agency BecauseXM and Hammerheadvr to deliver the project. Boursin exhibited this in various malls and events around the United Kingdom. Click here to Oculus link to try it for yourself.

It’s quite extravagant for a cheese company and we like it because it sets the bar high. Their exhibit also includes wind jets so you can truly experience this adventure.

A bit older this one, but still worthy. TopShop offered members of the public a unique front-row view of their exclusive fashion runway show during London Fashion Week using a 360 panoramic video stream.  Lucky competition winners got to experience this in a special pop-up space in TopShop’s flagship London store, providing great visibility. As a bonus, the user could find additional behind the scene footage from within the experience. This experience was created by the London VR studio Inition.

This is a great use of the technology, well executed and one of the very first of these types of experiences for the Oculus. Congrats to the guys at Inition.

Test driving a car through virtual reality makes a lot of sense if you don’t have a car dealer close by. It is great to see Volvo make an app to support the launch of their XC90 SUV.  It puts you in the cockpit and takes you on an idyllic ride through the country. The vergewrote that though the experience was a little fuzzy and inaccurate they thought it was clever. This was also done by Framestore VR Studio and you can read their case study for more info here.

We think this is a great move by Volvo – a company that has struggled perhaps to appear modern and relevant compared to their competitors. By adopting VR in this way they’ve made the public look at their brand in a new light. It also might become the standard by which future test driving apps are compared to giving Volvo a first mover advantage in the virtual reality industry.

A Tequila company might not be an obvious beneficiary of a VR marketing strategy, but Patron used the power of VR to tell a compelling story around the companies product. Using a mix of live action and computer graphics they created a 360 journey following the product lifecycle from agave field to being served at a glamorous party. The entire production took six months and was developed by creative agency Firstborn, post-production agency Legend and sound design agency Antfood. When Patron does events, they’ll bring a virtual reality set up to show audiences their process.

This was good because it gives the user an inside look at the process of creating Patron’s Tequila. It’s both entertaining and educational.

To support the launch of a new hiking boot, the Capra. Merrell created a VR experience called Trailscape that takes you on a dangerous mountain hike. Participants walk along a stage set that is mapped to the virtual experience to create a new level of immersion. The motion capture allowed adventurers to explore the mountainside, with tactile elements such as rope walkways and shaking wooden planks, making this one of the most immersive VR experience to date. Showcased at 2015 Sundance Film Festival, it was the brainchild of Merrell, agency Hill Holliday and Framestore VR Studio. You can read more here.

Trailscape does a good job of integrating the brand in a powerful user experience. We really like the fact you can walk around in this demo, which is relevant from the product and also is not something we see often in VR experiences currently. From the reaction of the users they had a memorable time too!

Imagine being able to transport yourself to a beach paradise whenever you wanted?

Framestore VR Studio and Relevant partnered with Marriott to create a unique teleportation experience for the public. Framestore VR Studio writes that it’s, “A Revolutionary 4D Tourism experience for Marriott Hotels, that teleports you first to a Marriott Hotel and then to the beach in Hawaii.” Inside a telephone booth-like structure, they used Oculus Rifts, heaters, and wind jets to take users on a trip to Hawaii and London. Whilst it’s not quite the same as actually being there, it might help you decide on your future trips. It also helped Marriott position themselves as a forward looking and relevant brand in the market. For more information, you can view the case study here.

We liked this because it combines visuals with the other senses, going beyond what it possible by just showing a 360 video. Whilst, not a cheap campaign to produce it was successful enough for Marriott to commission a second experience. Showing VR is more than a one-off gimmick but something that can be core to a marketing strategy when used properly.

That’s our list! However, not every campaign made it and below we highlight other campaigns that you can learn from.

The Apollo 11 Mission was the iconic mission in 1969 that landed Earth’s first human on the moon. Immersive VR Education decided to educate enthusiasts to re-create this event in virtual reality under the same name. The result is the best history lesson since Crash Course decide to start their amazing YouTube series. The project started on Kickstarter and has now published the final result to its backers.

Ok, this isn’t really a marketing application as it was made by fans rather than NASA. But we love it so much we think this is precisely the kind of project an organisation like NASA should be embracing. Education is a big part of marketing and this gets props for the clever integration of education and awe. The use of historical audio throughout the experience sells the authenticity.

Disney released a 360 VR fly through experience of one of the locations in the new upcoming Star Wars movie. In it you feel like you are inside one of the speeders during an epic battle. This content was also released using Facebook’s new 360 videos feature, which although not technically a VR experience allowed them to reach a wider audience.

To be fair Star Wars probably doesn’t need any help marketing itself but we picked this because it gives users a taste of the movie in a different way than a trailer can. It’s also an intelligent re-use of assets that would have already been created as part of the production of the movie. 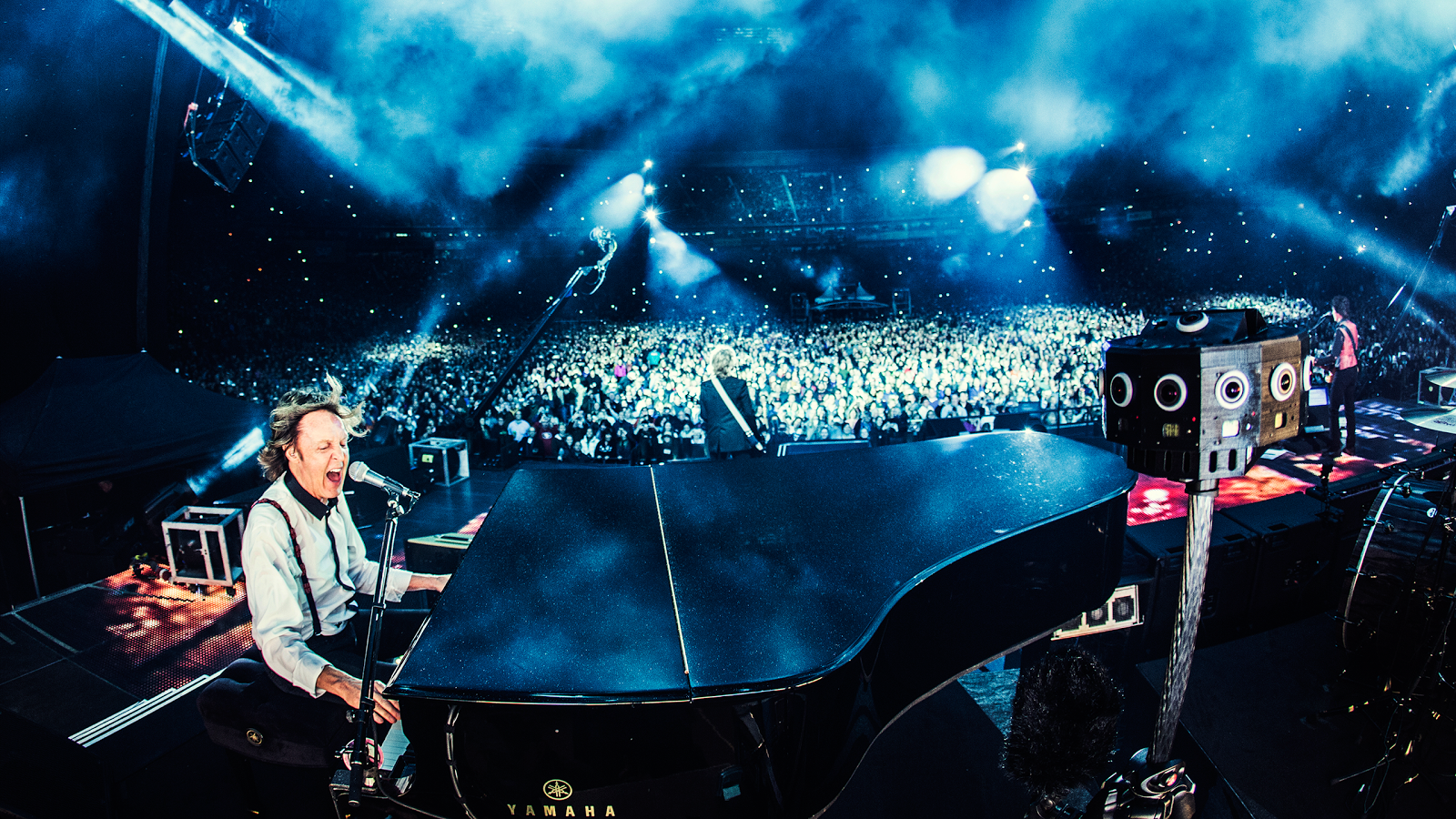 Jaunt produced a 360 Video Recording of Sir Paul McCartney’s performance at Candlestick Park. You can download the app on iOS or Android to experience the event (spot the 360 camera rig in the right corner of the picture).