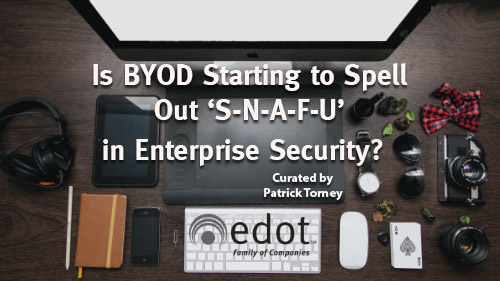 Is BYOD Starting to Spell Out ‘S-N-A-F-U’ in Enterprise Security?

March 16th, 2016 Posted by Glenn Baruck Technology 0 thoughts on “Is BYOD Starting to Spell Out ‘S-N-A-F-U’ in Enterprise Security?”

“It’s difficult to discuss the real-world concerns of network security without scare tactics, this article is better than most.”

When did the bring-your-own-device (BYOD) movement really start? Did it begin with gadget lovers bringing their new toys into the office, or with people hooking MP3 players into their corporate PC? Or did it only begin when employees declined to use their corporate-issued phone or laptop? Either way, BYOD is an evolving and unstoppable trend that is rather challenging to control no matter how stringent a policy companies enforce in that regard.

This brings us to the rather evident subject of security. Most organizations’ security teams have already understood that limiting BYOD is futile. Policing it is resource-intensive, and counting on employees to do the right thing is likely to be the root of disaster. Most organizations are working to enable BYOD in the most secure way possible by allowing certain types of devices into their network, enforcing policies, demanding certain mobile apps be downloaded, imposing long password requirements for mobile screen locks or using a variety of authentication schemes.

How Can BYOD Compromise Security? 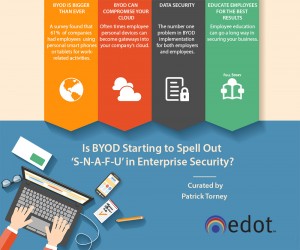 These measures are great, and they surely add a significant layer of security to the overall BYOD concept within any organization. However, what should your security team do if John, who just flew in from California, walks into your office sporting a new, nifty Android smartwatch, and your policy only allows iOS devices into the corporate network?

What if John is a senior researcher for the company, and he just signed up for a fitness wearable that collects way too much information about him, to which he is entirely oblivious? John might be OK with giving up a bit of his own privacy for a shiny new gadget, but are you ready to do the same? How about the very real scenario of John’s Android-based smartphone getting infected with malware that is now collecting his SMS content and emails, listening in on his phone calls with business associates and granting an attacker an insider view of his research?

Worse yet, the cybercriminal has access to John’s Gmail account directly from the app on the watch. As a matter of fact, he has already sent you, the chief executive officer, a spear-phishing email from that address, which you opened yesterday and unknowingly installed a remote access Trojan on your corporate PC. Does this sound farfetched? Think again.

These risks are as real as it gets. How many employees like John are walking in and out of the office every day? What other devices and insecure apps are they running straight onto the company Wi-Fi, plugging into their corporate endpoints or reusing their corporate password on? With that in mind, it’s easy to see how much wider an attacker’s window of opportunity is to successfully carry out espionage, disruption and corruption tasks.

The average enterprise has more than 2,000 unsafe or malicious apps installed on staff mobile devices, exposing sensitive information and performing suspicious actions, according to new research. Of these, 85 percent expose sensitive phone data such as device location, call history, contacts, SMS logs and SIM information. A further 37 percent apparently perform “suspicious” actions, such as recording phone conversations, installing or uninstalling apps, running additional programs or checking to see whether the device is rooted or jailbroken. That does not make any security professional feel cozy inside.

So how do we wrap our heads and our security around BYOD with a mobile marketplace that is rapidly expanding into new devices, operating systems and a new slew of wearables? These devices are impossible to control because of their inherent mobility and their dynamic content in terms of apps and how they are used by users and app developers.

What remains a constant of sorts is the enterprise’s own endpoints, be they mobile or fixed, and the security applied to them from within.

At the end of the day, employees’ personal devices and wearables can be looked at as a doorway for attackers targeting the organization. They will be used for reconnaissance and for preparatory tasks such as spear phishing. Attackers will use that door to find an endpoint. Only from there will they be able to work toward their actual malicious goals.

So what can organizations do to secure their employees and lower the potential of an eventual breach through risky devices?

Teach employees about mobile malware, the exorbitant amount of malware strains in circulation today, what malware does and how it does it. Explain what links BYOD with the company’s information security, and list best practices.

2. Have Presence on the Device and Secure It

Enforce security policies on the devices employees use to carry out business, including the Virtual Private Network connection through an application you provide. Bolster security from inside your application by using a solution such as IBM Security Trusteer Mobile SDK™.

3. Expect the Next Step — Your Endpoints

Attackers might begin an attack in a mobile device, but their stronghold will come from eventually compromising an endpoint. Fortunately, endpoints are precisely where the organization’s security has the most power to detect, sabotage or stop the attack from seeing eventual success. A highly secure endpoint, where exploitation attempts fail, malware installations are sabotaged and data exfiltration dissipates, can stop the progress of an advanced attack and alert security teams to the attacker’s presence.

We live in a brave new era where only the evolving survive. Organizations nowadays must adopt progress and enable it with a progressive attitude. Doing so should not come at the expense of putting the business in jeopardy. As the threat landscape constantly morphs, we must outsmart threats using layers, ingenuity and technological innovation so that no matter which trend may come, it won’t have to spell out a security snafu.