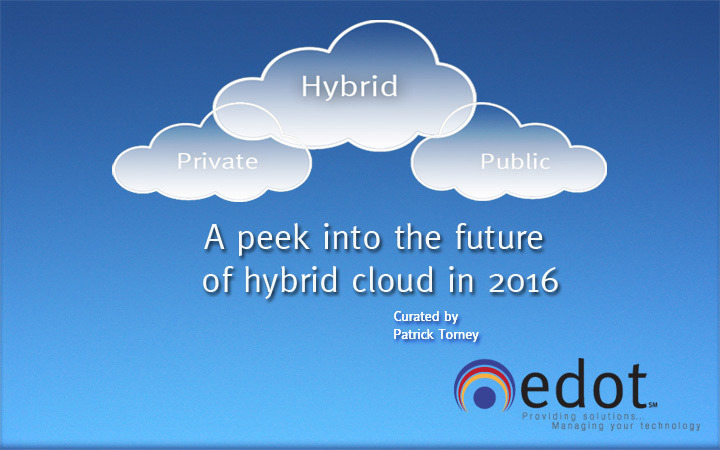 A peek into the future of hybrid cloud in 2016

“Hybrid cloud computing has been the answer for our clients real-world challenges. It provides the right blend of flexibility and performance, and appears to be the answer to the frequent question of “what’s next?”

Over the years, I’ve learned that predicting what will happen in emerging technologies is much easier than predicting when it will happen. Case in point: hybrid clouds. Many of us in the cloud community predicted in 2009 that cloudbursting would be the impetus for an explosion in public cloud consumption; and I went so far as picking 2010 as the beginning of the transition.

Well, my prediction was sound in direction but way off the mark in timing. Since 2009, I’ve learned that the barriers to hybrid cloud are more numerous than originally anticipated — something I’ll address in greater depth in a future post. However, seeing mass adoption on the horizon in 2016 (I’m crossing my fingers this time), it’s important to move the conversation forward by providing some introspection on where the hybrid cloud is today.

How quickly are enterprises moving to hybrid cloud solutions?

Interest and consumption are beginning to ramp up quickly. Companies are realizing that there is a bigger difference between private cloud, which tends to be nothing more than mass virtualization, and public cloud than they were led to believe. It’s the reason why so many private cloud implementations fail to meet their goals; so many, in fact, that it’s become a staple topic of conferences and blogs. As a result, IT leaders are making a rapid shift in the direction of public cloud by adopting hybrid cloud. The combination of private and public cloud gives IT the tools required to help the business innovate and iterate faster at a lower cost.

How satisfied are enterprises once they get to the hybrid cloud?

Few companies feel that they are there yet, so the promise exceeds the realization; but the scales are tipping. Using a private or public cloud is easy; however, mixing them to deliver a service is quite challenging. Application, integration, and data architectures need to be revisited, sometimes tweaked, while other times overhauled. New tools for deployment, monitoring, and management are required. Additionally, IT teams must develop new skills to collaborate more closely. Organizations with strong DevOps teams have already surmounted many of these obstacles, thereby smoothing their transitional path to hybrid cloud. However, this still remains the exception, not the rule. Beyond the technology stack, there are still tough lessons to be learned in compliance, operational support, and financial management.

Today, the benefits of the hybrid cloud manifest themselves primarily as lower-cost and higher-speed; however, without proper management of the provisioning and de-provisioning cycles, the cost equation can quickly turn upside down. A properly configured hybrid cloud solution changes the conversation between IT and the business as it shortens timeframes and expands possibilities.

What’s next beyond today’s hybrid clouds?

Hybrid clouds represent an important step in the transition of IT from technology manager to solution provider. Deploying hybrid cloud solutions will help companies become comfortable with public cloud security, operations, and financial management. Although there will be challenges and hurdles, over the next five years companies will seek to offload as much of their technology stack as possible to the public cloud, driven not only by the economic benefits and shared resources, but also the freedom to choose among multiple vendors on their terms. Cloud-dependent technologies, such as Internet of Things (IoT), real-time analytics, and collaboration, will continue to evolve the end-customer relationship, which in turn will require public cloud solutions to meet scale and time-to-market-challenges. As private data centers give way to the public cloud, public cloud itself will transform from a regional to a local focus.

Deploying hybrid clouds is the next step beyond private clouds in the evolution of cloud computing. The stakes are high, as those who figure it out first will gain a significant advantage in agility, efficiency, and elasticity unshared by their market rivals. Now is the time to start plotting the path to the future and to move up the cloud learning curve.