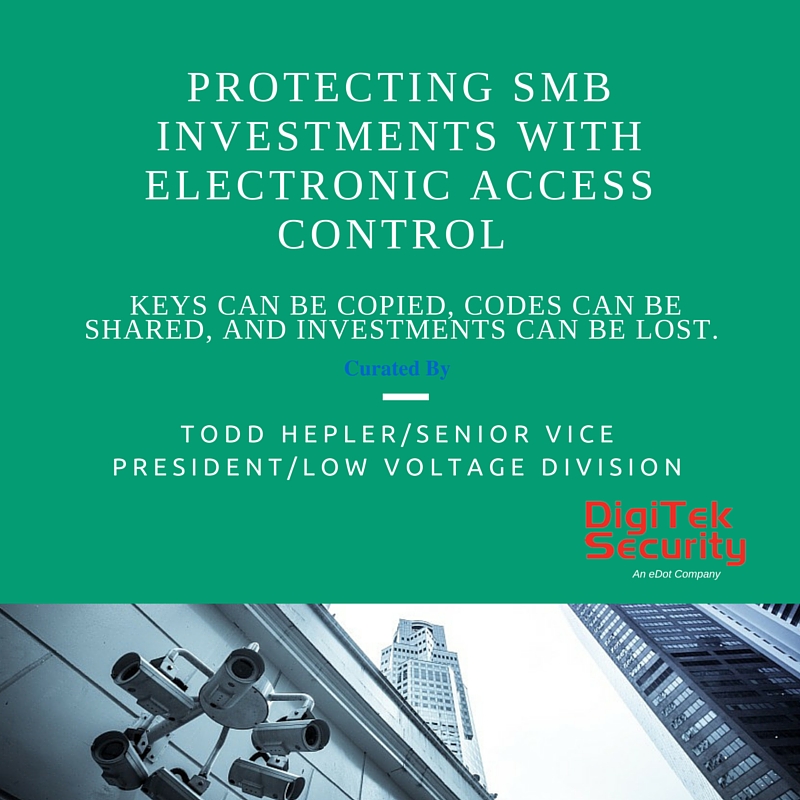 “Most people think that access control is only for big companies with lots of doors. This article points out the benefits for SMB’s as well.”

Keys can be copied, codes can be shared, and investments can be lost – small businesses and schools are no strangers to intrusions and crime, however, adding electronic access control, even in small-scale environments, can help mitigate the risks of a break-in, secure a facility, and track usage to investigate employee theft without incurring heavy costs.

“We only had manual locks before, and for general safety reasons, we needed to switch to something more controllable,” says Brian Shanks, principal at Alden-Conger School in Alden, Minnesota. “Even when it came to budgeting for this installation, it came down to making a decision about the safety of our students and staff. Access management was our first step for security.”

In time for the 2013 fall semester, Shanks arranged for three new electronic access locks on the front door and the back door, near the playgrounds. All teachers were given a fob to reenter the building after recess or P.E., but doors remain locked during school hours.

“End users have to look at past incidents, either inside or outside their organization, to decide which problems they need to address, with policy or technology,” says Fred Scripture, of California-based integrator Commercial Controls. “From a small business or building owner’s perspective, the ability to access data is key for awareness on possible incidents and how to mitigate those risks in the future.”

In terms of SMB security now, Scripture sees more users moving from magstripe cards to a Prox card system, often based on the security of the card.

“You can reproduce a magstripe card very easily, but not a Prox card. The issue is price – it’s a balancing act: a magstripe card might cost $1, but a Prox card could be $8-$12. When you want a stronger level of security at a smaller door count, though, an investment in Prox could be worth it, from a convenience standpoint and for scalability,” he says.

Convenience without sacrificing security was a key point of the access management installation at Park Pacific Apartments in St. Louis. The 22-floor building, built in 1926 as the Missouri Pacific Railroad headquarters, has mixed-use occupancy, divided between ground-floor retail, commercial office space and high-end luxury apartments. Due to the various occupants of the building, it was necessary to separate access rights throughout the building to protect tenants and assets.

“We had Prox keycard access installed throughout the building (installed by Primary Systems, Inc.) including on the exterior doors and in the elevators,” says Samantha Faerber, the property manager at Park Pacific Apartments. “This way, if you live on the ninth floor, you can only access the ninth floor apartments. This offers both security and privacy to our tenants.”

When entering the building, tenants can unlock exterior doors with their own Prox card and then use their card again in one of the six elevators to access one of the common floors or their own floor. The common space at the top floor, open to all residents, includes several entertainment spaces, a large meeting room, a gym and access to the roof and rooftop pool. The residential lobby is also separated from the commercial lobby and retail access points. Doormen are on-site 24/7 to prevent piggybacking into the building or to help residents who have forgotten their access cards.

“We’re working to maintain an A-Class property in an urban environment,” says Faerber. “This is why we needed cards instead of a keypad system. With keypads, there is more room for error – a PIN is easier to share and abuse than a keycard.”

Faerber can also adjust maintenance workers’ and residents’ access rights throughout the year. For example, during winter months, rooftop access is limited, as the pool is closed and residents are not allowed. However, during warmer months, residents are allowed on the rooftop until midnight (“Because no one could do anything really good on a rooftop after midnight,” she says) and maintenance access is granted to manage rooftop cleaning and upkeep.

“We review access rights on a monthly basis, but we can adjust those to daily if necessary, such as if a specific apartment needs some maintenance, we could grant access to that floor.”

For a small school like Alden-Conger, there was a perception of an open campus, with teachers coming and going through various access points and community events frequently left the building open. With programmable automatic locking from RS2 and local integrator Kendell Doors, however, Shanks can program the building’s doors to lock and unlock during various community or extracurricular events on the campus.

“We introduced the new system in our summer newsletter and in the local newspaper, just so everyone who would use the school knows about our new access system and our new protocols for visiting, and for a small school today, anything we can do to enhance student safety is not a difficult proposition for people to accept,” says Shanks.

“Electronic access control provides both actionable data and peace of mind,” says Scripture. “You can use it to restrict traffic flow through certain areas or even as a timekeeping function. Some security end users have worked with access systems to control building utilities after hours to keep power costs down.”

Robert Russell, Vice President of Rock Glen Family Resorts in Arkona, Ontario, is using his access control system (currently a magstripe and Prox card hybrid from CanSec Systems) to maintain the exclusivity of the resort for his members. Card readers on the front traffic control gate, as well as on common buildings and bathrooms, help Russell investigate any issues on the property.

“We check who is recorded as swiping into an area, verify that the credential record matches the actual person through our surveillance cameras, and then take action if necessary,” he says. “The system stops a lot of people from even entering our resort to begin with. I would say that we probably saw ROI from the system within a month, just from preventing people from driving on-site to drop off trash or use our amenities without a membership.

“Our members really enjoy the system as well, because they know their kids are safer here with controlled access.”

The DIY installation even helps Russell better manage his employees on site: “The card reader at the gate tells me when they arrive at the resort, and I can check that against what time they clock in or out. So if they arrive too early or stay too late, we can look into exactly what they were doing during that extra time.”

Just outside Claremont, Minnesota, Dan and Lori Hodgman were seriously considering how to boost security on their new office and service building for their business – Hodgman Drainage Company Inc. While the building was under construction, temporary surveillance cameras caught numerous people pulling off the busy highway nearby to explore the new property. A broken window clinched the decision – they went ahead to add RS2 Prox card readers on six doors throughout the facility, either in the maintenance shop or the large attached office, installed by Paape Companies, Inc.

“We can control the locks individually, separating out access privileges by job, responsibilities and date,” says Dan Hodgman. “Some of our employees don’t need to be in the office, so their cards don’t have access to that area. Winter is a slower time for us, so we change shop access privileges to Monday through Thursday, unless an employee is on call, so they can take Friday off and we know the shop will be secure.”

“We save a lot of time that we used to spend checking on our old manual locks every night, and it gives us a lot more peace of mind that our new facility, our tools and our investment are secure,” he says.

“It was not inexpensive, certainly,” says Lori Hodgman, “but without it, I felt like we were sitting ducks for theft. Now, we feel like it’s more secure and our investment is safer – in the long run, it’s well worth the investment.”

“For the owners of the property, the addition of access control was not a question,” says Faerber. “It’s a preventative way of protecting our assets from unwanted visitors, insurance liability and property damage, and it lends a sense of security to our residents and tenants.”

“For small and midsized businesses, there is more of a focus on the cost breakdown when it comes to choosing a new system,” says Joseph English, Systems Manager for Academy Systems Group, a locksmith and integrator company in metropolitan Atlanta. “Larger enterprises are typically more capable of handling heavy front-end costs, such as software licenses, bulk-order access cards and readers. For an SMB, it comes down to dollars on the front end, including how many options you can have.”

While many end users are sold on a product based on its many value-adding capabilities, not all of them are necessary for an SMB’s access management to perform its original, intended function: security. So, when debating between systems and providers, English suggests seven questions that SMB end users should answer before choosing a system:

Once the business owner or security leader has determined which functions are necessary, and which would merely be a “nice to have” function, he or she can start whittling down the cost of the system by eliminating the extraneous features.

“SMBs shouldn’t rule out integration, either,” says English. “A decade ago when integration was getting more mainstream, it was still a heavy investment from the installer’s side, in terms of time and engineering to get multiple systems (such as access controls and surveillance cameras) to work in one program. Now, it’s starting to become an included option on hardware straight from the manufacturer, which lowers an integrator’s time investment and saves the end user money while providing more functionality.”